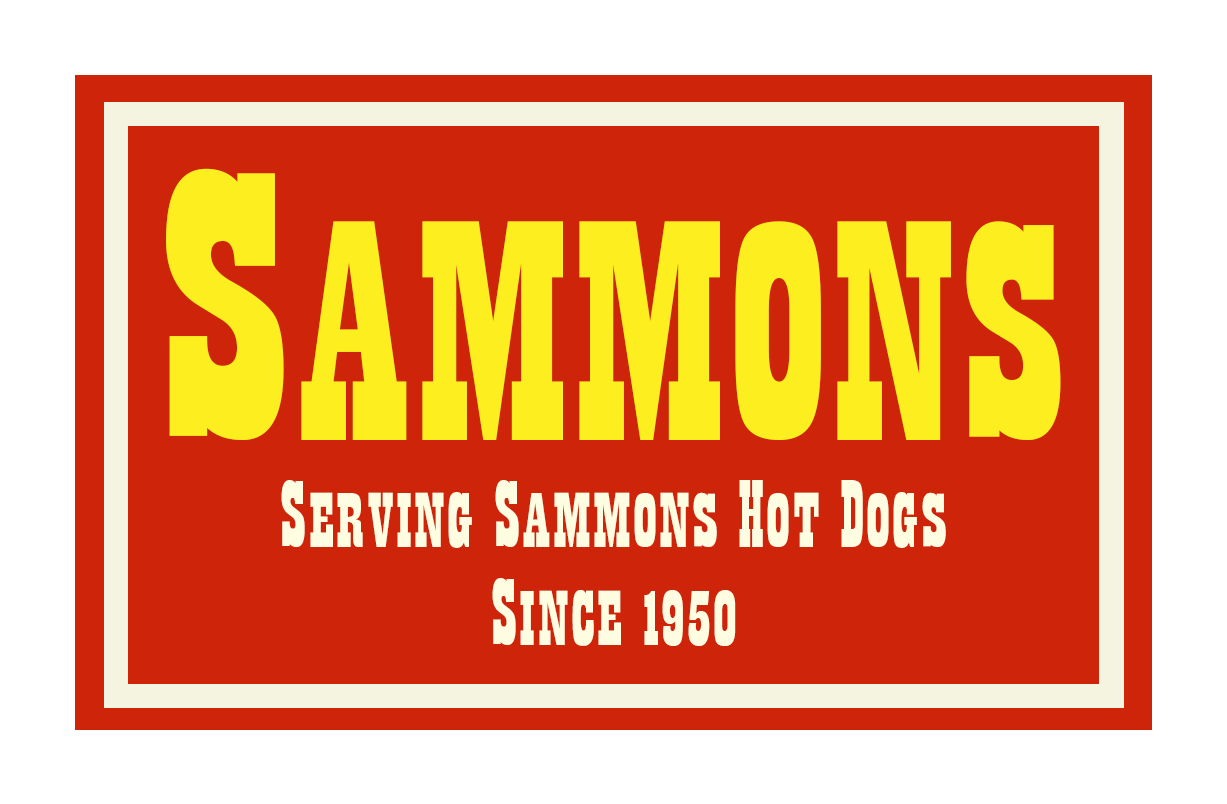 We accept all major
credit & debit cards
No minimum!

A quarter pound of 100% beef served on a toasted bun with mayo, fresh cut lettuce, tomato, and onions for only $2.89. Add cheese for only .40 extra!

The Original Sammons Hot Dog...served with mustard, fresh diced onions, and our own secret recipe Chili on a steamed bun for 1.50. Add Kraut or Cole Slaw as additional toppings for only 35 cents each...add Jalapenos or Sweet Relish for only 15 cents each!

Carolina pulled pork bbq with a sweet bbq sauce topped with our Cole Slaw served on a toasted bun for only $3.09

In June of 1950 Doran Sammons spent 30 minutes at lunch time waiting for a hot dog that he had ordered at a local drug store, only to be served a cold product. He felt he could serve a hot product in a much faster time. To prove his point he literally knocked out a hole in the brick wall of Cole and Sammons Market that faced Elk Avenue and framed it in with only a small window opening and the first “fast food establishment” in Carter County was born. Two people could barely fit in the area, and people nicknamed it “The Hole in the Wall.”

Doran added a four-burner hot plate unit and then took two hot water style home canners, flipped the racks upside down and fitted a layer of chicken wire to keep the buns above the water. Thus, the trademark “steamed” bun was born. Throughout the years the process has continued to be perfected. The first cash register was a Hav-A-Tampa cigar box to hold the bills, and a hollowed out piece of rectangular wood with four holes to hold the coins.

His concept proved wildly popular. He sold 180,000 hot dogs his first year for only 10 cents each. An average day’s sales was 100 to 120 dozen hot dogs. They were so popular that when diners finished, they didn’t always properly dispose of their wrappers. In response the street sweepers had to come down Elk Avenue every Friday and Saturday night because of the white tissue paper that littered the street. Hamburgers were added to the menu in 1961.

Sammons was closed on August 13, 2016. Denise Sammons made the decision to close the restaurant to focus her time on her other business SOZO Life & Wellness. After an outpouring of calls and online messages from people within the community and across the U.S. the decision was made to reopen the restaurant. Sammons officially reopened on October 28, 2016.

In October 2017, after 66 years of being family owned and operated, Sammons was sold to a new owner, Chris Davis. Chris is a Carter County native, a graduate of Elizabethton High School and ETSU. He has over 25 years’ experience in quick service restaurant management. The original menu is still available with the addition of Soft Serve ice cream, a Chicken sandwich, and Cheddar Tots.